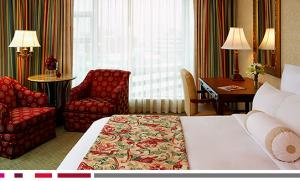 Location
- Out in the open
- At the sea
- In the countryside
+ Close to shopping
+ Close to sights
Arrival
- Free parking
- Paid parking
- Bus parking
+ Public transport connection
General
+ Restaurant
+ Bar
+ Free wifi in the room
+ Pool
+ Spa / Salon
+ Fitness center
+ 24/7 room service
+ Sustainable concept
Events
+ Rooms with daylight
+ Terrace / outside area
- Free wifi in event area
+ Business center
- Drivable areas for cars
+ Accessible facilities
+ Equipment for virtual events
+ COVID-19 hygiene concept
Ideally located downtown Victoria, the award winning Victoria Marriott Inner Harbour is walking distance to all there is to see and do in Victoria, BC. Stroll to the famous Inner Harbour for Victoria attractions, musicians and artisans, and whale watching tours. A world of shopping, dining and one-of-a kind discoveries await. Our downtown Victoria BC hotel guestrooms feature the kind of luxury you would expect from a Four Diamond Marriott Hotel including free wireless high-speed Internet and individual climate control. All hotel rooms feature duvets and luxury linens, deluxe robes and many include spectacular ocean and mountain views. Food & beverage excellence is defined in the hotels signature restaurant Fire & Water Fish and Chop House, which has earned distinction as one of Victoria's premier restaurants.
Read more

Overview of the capacities of Marriott Victoria Inner Harbour

When every detail must be perfect, you can count on our advanced facilities and expert meeting professionals to deliver a productive and successful outcome.
Read more

You would like to manage this profile and use the advantages of ALLOCABO?