TOP reviews and commission-free, direct booking of venue hotels in The Netherlands

TOP destinations in The Netherlands

Current reviews of the venue hotels in The Netherlands 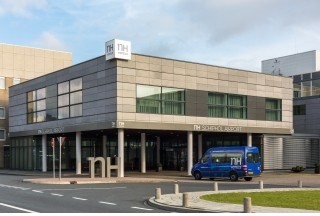 With ALLOCABO you can quickly and easily find the perfect hotel for your next meeting or event in the Netherlands, no matter if you’re looking for a large modern hotel in the capital city Amsterdam, or a smaller hotel meeting venue in Rotterdam or a mid sized conference hotel for an upcoming workshop in the Hague.  With our easy to use and intuitive platform you’ll be able to search, compare and book the best hotels with the ideal meeting room and conference room facilities for your event.

Tourism plays an important role for the dutch economy. The dutch capital Amsterdam i.e. attracts several million tourists and visitors from all over the world every year. And these are not just leisure tourists, but also many business tourists who come to the city to visit a trade show, attend a conference or business meeting or event. Amsterdam in particular is known for its architecture, canals, multiculturalism and nightlife and of course also for it’s beautiful tulips, it’s coffee-shops and the fact that most people cycle around the city.  If you’re thinking of hosting your next event in a hotel in Amsterdam, you’ll find a large selection of available meetings and conference hotels on ALLOCABO. Simply select up to 10 hotels and send a free & non-binding inquiry to receive proposals in your inbox in less than 24 hours. It’s that simple.

If you prefer to host it in another dutch city, you could i.e. choose Rotterdam or the Hague. Rotterdam is particularly well known for its art museums and galleries and the Hague, the Dutch seat of government and royal residence, is home to numerous sights, including the Binnenhof, the Paleis Noordeinde and the International Court of Justice. There are over 2,200 classified hotels in the Netherlands, including numerous hotels with meeting rooms and conference facilities to book and we are sure you’ll find a suitable meetings venue on our site.

The Netherlands - a top meeting destination

Netherlands (or also called Holland) lies in North West Europe and is a popular country for companies to organise their meetings, events or trade shows there.  Centrally located with a large airport hub, beautiful countryside, beaches and city - there’s something for everyone in Holland. The most important cities for business and business tourism are Amsterdam, The Hague, Rotterdam, Utrecht and Groningen and each offers a large variety of business hotels with a selection of conference facilities which can hold between 5 - 400 event attendees. The Netherlands rank amongst the top 10 countries with the most trade shows, conferences, and business events, with over 330 of these events taking place nearly every year. Holland is one of the four autonomous countries of the Kingdom of the Netherlands and is bordered by the North Sea in the north and west, Belgium in the south and Germany in the east. The official name of the country is Nederland, while in the standard German the country is called "Netherlands" and is usually called "Holland" in colloquial language. The name "Holland" actually refers only to the northwestern part of the country,  the former province of Holland as the most important province of the Republic of the United Netherlands. Many world-famous painters were Dutch. In the Golden Age there were about 700 painters working in the Netherlands, who completed about 70,000 paintings a year. Such an expulsion of paintings is unprecedented in the entire history of art and was not achieved either in the Italian Renaissance or in France at the time of Impressionism. Famous painters of the later epochs were Vincent van Gogh and Piet Mondrian. The Dutch provinces are composed of Groningen, Friesland, Drenthe, Overijssel, Flevoland, Gelderland, Utrecht, North Holland, South Holland, North Brabrant, Zeeland and Limburg. Tourism is an important economic factor for the country. Amsterdam in particular attracts several million tourists from all over the world every year. The Keukenhof, the Anne Frankhaus, the Rijksmuseum and the Dam are all popular tourism attractions. Amsterdam also attracts many culture-loving tourists who come to visits one of it’s its many art museums and galleries and no matter which city you choose for your conference, seminar or event, each one has multiple attractions and activities to offer to your event attendees and delegates once the business part of the meeting is over. Not least The Hague, the Dutch seat of government and royal residence, convinces its visitors with its numerous sights, including the Binnenhof, the Paleis Noordeinde and the International Court of Justice. The Frisian capital Leeuwarden has been named European Capital of Culture for the third time and has attracted visitors from all over the world with its medieval core.
Facts and figures about the Netherlands

There are ten recognised UNESCO World Heritage Sites in the Netherlands, nine of which are in the Netherlands and one on Curacao. These world cultural heritage sites include the canals of Amsterdam, the windmills of Kinderdijk and the Dutch Wadden Sea. The Netherlands hosts many traditional festivals and celebrations every year which attract many international visitors. Some of those festivities include the New Year's bath in Scheveningen, the Amsterdam Light Festival, the spectacle at the cheese market in Alkmaar or above all the annual dutch national holiday - King’s Day every April in honor of King Willem-Alexander. You will also find suitable hotels with a variety of meeting rooms and conference room facilities in all of the big cities in the Netherlands. Simply search for your city destination here at ALLOCABO and find your next hotel meeting venue. Particularly popular conference hotels in the Netherlands are i.e the Amsterdam Marriott Hotel, the Waldorf Astoria Amsterdam, the Andaz Amsterdam, the Hilton Rotterdam, the Mainport Hotel, Crowne Plaza Den Haag or the Hotel Des Indes - A Luxury Collection Hotel in The Hague. We take the hassle out of finding & booking the best hotel in one of the many beautiful cities in Holland  - all while saving you valuable time and money. Inquire with up to 10 hotels in Holland, receive individual free proposals from hotels in less than 24 hours and easily compare, review and amend them before booking directly with the dutch hotel at attractive online prices.
★★★★★
★★★★★
1.5 / 5 (2 Stimmen)