Inquire for free with up to 10 hotels at the same time.
Ihre Hotel Auswahl
LOGIN

Login to your ALLOCABO account to view your conference hotel inquiries, proposals and reservations.

France is the largest country in the European Union in terms of area size and it has the third largest national territory in Europe. The most popular city in France is Paris but other cities such as Lyon, Marseille, Toulouse, Nice, Strasbourg and Lille also attract many business tourists per year and lots of companies host their events at one of the many business hotels in those cities. France ranks 5th in the list of the countries with the most trade shows, conferences and business events per year, with over 520 taking place in France every year. Why not host your event or meeting in France as well? Our easy to use online platform takes the hassle out of finding and booking the best conference hotel for your upcoming event and we save you valuable time and money. Tourism plays an important role in France, and this includes business tourism as well. Around one million people work in the tourism sector in France, and about ten percent of the gross national product is generated with the tourism industry in France. So it’s no surprise that France was considered the world’s most important tourism destination in 2010 with 76 million foreign visitors – and now ranks 3rd when it comes to the world’s most visited countries.

France has thousands of classified hotels, including numerous hotels offering meeting rooms and conference facilities to book for any kind of meeting or event.  Whether you’re looking to host a large sales kick-off in Paris for 250 people including overnight stay or you’re after a smaller boutique hotel in Marseille or Lyon or a stylish hotel to impress your event attendees in Cannes, at ALLOCABO you’ll be able to search, compare and book top hotels in the french city of your choice – all depending on the size and capacity of guest rooms, meetings rooms and conference facilities.

Top Cities in France for your conference 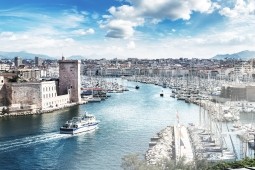 France is a democratic, intercontinental unitary state in Western Europe with overseas islands and territories on several continents. By far the most important and largest city in France is its capital Paris with over ten million people living there. The city also offers many hotels with an even larger selection and choice of meeting rooms to book for any type of event. Why not host your event or meeting in Paris?  Our easy to use online platform takes the hassle out of finding and booking the best conference hotel for your upcoming event and we save you valuable time and money. Or chose one of the other metropolitan areas around Lyon, Marseille, Toulouse and Lille - each one also with well over one million inhabitants and plenty of attractions and hotels to select for a business event. The best known and ideally suited hotels in France are the Paris Marriott Champs Elysees Hotel, the Mandarin Oriental Paris, Four Seasons Hotel Geroge V, InterContinental Bordeaux and Radisson Blu Hotel, Marseille Vieux Port. French culture is by large defined by its language. France does not see itself as a Grande Nation. In media policy, one's own culture and language are promoted through quotas for films and music. In the European Union, UNESCO and the World Trade Organisation, France is strongly committed to its concept of defending cultural diversity and culture is not a commodity that can be freely traded without barriers. The cultural sector is therefore an exception to the rest of the economy.

Facts and figures about France

Each region of France is rich in history and, in addition to its cultural peculiarities, has numerous sights that go back to Roman times. The French capital Paris has a wealth of world-famous sights to offer and the Eiffel Tower, the Louvre, Sacré Coeur or Centre Pompidou are just a few of them. But those are just some sites and attractions to offer your event attendees. There’s so much more the city has to offer when you’re planning your event programme and you can choose from many top international restaurants, a trip to Notre Dame or on the Seine just to mention a few. If you’re hosting your conference in a hotel venue outside Paris, the Palace of Versailles, the Pope's Palace in Avignon, the cathedral in Strasbourg, the Basilica of Saint-Sernin in Toulouse or the Cathedral of Chartres are important secular and ecclesiastical buildings and worth a visit if you find yourself in these cities. France also hosts a large number of mega-events each year, such as the Tour de France, Paris Fashion Week and the Cannes International Film Festival. With regards to international trade shows, the focus in France is on Food & Beverages (F&B) and general gastronomy events. Why not host your next event in one of the beautiful french cities, soak up the french flair, cuisine and culture and use ALLOCABO to help you find the ideal hotel and meeting & conference room facilities in France. Saving you time and money.
Rate this page