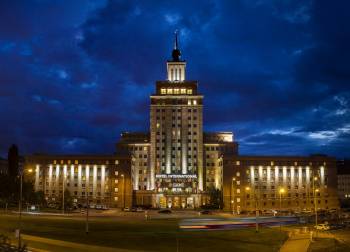 Location
+ Close to shopping
+ Close to sights
Arrival
+ Public transport connection
General
+ Restaurant
+ Bar
+ Free wifi in the room
+ Fitness center
+ Sustainable concept
Events
+ Rooms with daylight
+ Accessible facilities
+ Equipment for virtual events
+ COVID-19 hygiene concept
Hotel International Prague is included on the list of Czech cultural monuments and is located in a quiet residential area in Prague 6, in immediate proximity to the city centre (just two kilometres away). Václav Havel airport is just a 20-minute drive away, and you can take a pleasant walk to Prague Castle in just ten minutes.

The history of the whole hotel is very interesting. The building was built between 1952 and 1956 by decision of the then Minister of Defence Alexej Čepička. He reportedly hoped that the ceremonial opening would be attended by Josif Stalin.

Hotel International Prague was built in the socialist realism style, or “sorela” as the name of the architectural style is sometimes abbreviated. The building was originally intended to serve as accommodation for soldiers, but the army eventually declared that it could not use such over-sized accommodation, and so the building became a hotel at the last minute. It should be pointed out that this was mainly for military ranks and soldiers from allied nations. In the 1950s however, it was the most luxurious hotel in Czechoslovakia. It had almost two hundred rooms.

Unique decorations can be found in its interior to this day. They are the work of leading Czech and Slovak artists and craftsmen. The quality of the processing and design of its decorative features and lighting fixtures is pleasantly surprising.

Since 2015, the hotel has been part of the Mozart Hotel Group with hotels in Odessa, Budapest, Vienna and Baden. In 2016, it increased the capacity of its accommodation section by 24 rooms. In total, the hotel currently offers 278 fully air-conditioned rooms in the categories Standard, Superior, Executive, Executive Tower and Tower Suite.

The hotel possesses a significant conference centre with 14 halls and a total capacity of 1200 persons. Thanks to its flexible spaces with daylighting, it is the ideal choice for meetings, seminars and conferences of various types for up to 450 people.

Thanks to its location and services, the hotel is suitable not only for reservations by individuals and groups in Business or Leisure categories. We will also be happy to welcome your pets, and we offer free Wi-Fi throughout the hotel.

Overview of the capacities of Hotel International Prague

Hotel International Prague, built in the socialist realism style, is located in a quiet residential area directly opposite the Podbaba tram stop. The centre of Prague is only two kilometres away and can be easily reached by the underground or by tram. Václav Havel airport can be reached by car in just 20 minutes, making the location more than ideal for international meetings and conferences.

Hotel International Prague rightly ranks among the hotels with the largest conference facilities in Prague. Fourteen meeting rooms offer multifunctional facilities for meetings and conferences of various types, including two congress halls with capacities of up to 350 and 450 persons. All of the halls are primarily characterised by their unique high-quality decorations created by Czech artists, their high ceilings, and daylighting. The largest congress hall with a capacity of 450 persons provides access to a terrace connected to our extensive garden, which will certainly be a pleasant change for your meetings in the summer months, and which can be used for a light lunch or coffee break.

Our event coordinators are experienced professionals and will stay with you at your planned event from beginning to end. They are there to coordinate every detail and to make sure that your event runs smoothly to your full satisfaction.
Read more