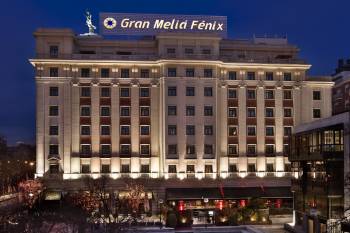 Location
+ Close to shopping
+ Close to sights
Arrival
+ Public transport connection
General
+ Restaurant
+ Bar
+ Free wifi in the room
+ Pool
+ Spa / Salon
+ Fitness center
+ 24/7 room service
+ Sustainable concept
Events
+ Rooms with daylight
+ Terrace / outside area
+ Business center
+ Accessible facilities
+ Equipment for virtual events
+ COVID-19 hygiene concept
Exceptionally located in the famous Plaza de Colón, the Gran Meliá Fénix is a point of reference for the city hotels and travel, a member of the exclusive group of The Leading Hotels of the World and with the celebrated DRY Cosmopolitan Bar by Javier de las Muelas, the pre-eminent expression of luxury and service all combined with irresistible Spanish charisma.
Its magnificent location in the exclusive Salamanca neighbourhood, in the heart of the financial district and surrounded by famous streets such as Serrano, Velázquez, Goya and the Paseo de la Castellana, allows our guests to walk to the city’s most emblematic landmarks, just 10 minutes from the famous Gran Vía and the major museums such as the Prado, the Reina Sofía and the Thyssen.
After its opening in 1953, it has been the hotel of choice for visits to Madrid by such prestigious guests as David Beckham, Bill Clinton, Gary Grant and the Beatles. Since 1953 it has been the epitome of guest service and currently provides the most contemporary expression of superior quality, the “Red Glove Service”, with new, recently inaugurated features and spaces such as the new Red Level Lounge for the most discerning guests.
The new DRY Cosmopolitan Bar by Javier de las Muelas, the “Vatican” of cocktail creation in Madrid, adds the ultimate sophistication and essence to the hotel lobby area, becoming one of the most important bars in the world and the place to be at the Gran Meliá Fénix.
Its famous suites with their terraces and hydromassages right in the heart of Madrid and the new Red Level Club with bathroom amenities by Clarins, Nespresso machines and free WiFi have made the Gran Meliá Fénix a point of reference for the whole city.
Read more

Overview of the capacities of Gran Meliá Fénix